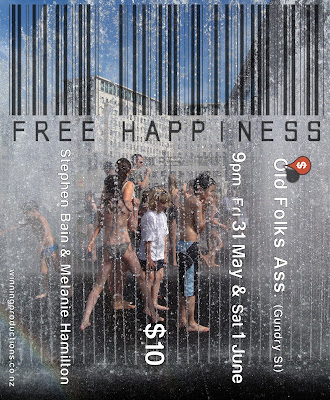 Free Happiness is about exchanges; it is an exchange. Bring $10 and potentially leave with more!

Melanie Hamilton  and Stephen Bain team up for two shows designed to make everyone richer.

Spend time with us, spend money on things, spend energy to expand your mind and inflate the universe. Watch your spending grow!

“I love to spend money, it makes me happy.”
Bronagh Key (wife of John Key)

“All energy you expend is still out there in the universe somewhere waiting to be spent, according to my friend Richard Branson.”
Stephen Hawking

“You get what you pay for…unless someone else buys it for you”.
Glamour Stock (Stephen Bain & Melanie Hamilton)


FREE HAPPINESS is an experimental performance investigating the shift of power between audience and performer, and the exchange of money as common consent.

A first development workshop was held for two weeks in Auckland at the Winning Productions studio (part of the Audio Foundation HQ in Poynton Tce, Auckland). This workshop culminated in 2 public performances at the Old Folks Association Hall in Gundry Street. 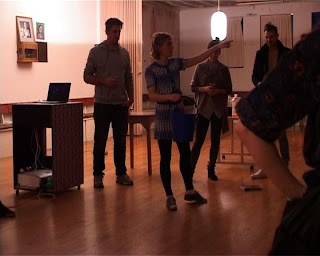 The audience enter a busy community hall.  They find one of the performers and pay them $10. The performer cheerfully gives them back 11 x $1 coins. This is unexpected; the show has been advertised as $10.

At the beginning of the night wine and juice is sold for $1. The cost (therefore value) of the wine increases over the course of the evening resulting in interest being rewarded to those who’ve held onto their investment - then tax taken from those who received interest.

Opportunities for sharing stories on wasting money are given. This is followed by an opportunity to discard any negative thoughts regarding money; anyone who wants to is invited to put $1 in a bucket and let Stephen and Melanie throw it down the drain outside as a symbolic cleansing on their behalf. [This caused considerable upset / conversation / interest in our first development].

There is a large gong. At any time it can be banged and a Selling Bonanza begun. Stephen and Melanie sell items from their artistic lives. [Audience members sold everything from an apple to a piece of paper. Some items were on-sold].

Two different futures of FREE HAPPINESS are presented as investment propositions. Melanie presents an expansion of scale, with the future show having international dancers, an accomplished set design and taking place in a big theatre; a larger budget with ironically smaller returns. She dances a piece of contemporary choreography from the future show. Stephen presents a smaller, ‘low-fi’ option, where artistic purity is aligned with minimalist spending and creative solutions to budget shortfalls with the future show toured to abandoned shops on Auckland’s K’ Road; a smaller budget with small but guaranteed returns. He dances in a giant mask evoking the unknown. The audience votes with their coins while Stephen and Melanie keep presenting the future.

As FREE HAPPINESS progresses, the $1 coins Stephen and Melanie are getting/getting back off of the audience are displayed on mounted vertical wooden columns, in the manner of community fundraising events. The audience and performers can see ‘how well’ the show is doing.  Two-thirds of the way through the show the Gross Domestic Product of the room is calculated followed by the Gross Domestic Happiness of the room (using formulae provided by Wikipedia). These are then jointly calculated and the increased percentage of wealth experienced by everyone in the room is presented. It is surprising that attending FREE HAPPINESS has turned out to be such a substantial investment.

Two alarmed and voiceless deer-like creatures appear on the hall’s small stage, holding the same red circles of cloth on which all prior financial transactions have taken place, only this time they’re being used as a shield. The audience take the bait and throw money at the performers as target practice.

The performers take the deer antlers off and silently beckon the audience onstage. The curtains are closed; the audience is onstage in a tight group. Through gentle guidance the audience creates a short show, which is then performed to empty chairs. The group return to the chairs and observe the (invisible) performance. Stephen and Melanie return to the stage and encourage the audience (now also performers) to invest in the future of this new creation and find a producer amongst them. Someone walks away with a lot of money. FREE HAPPINESS continues… 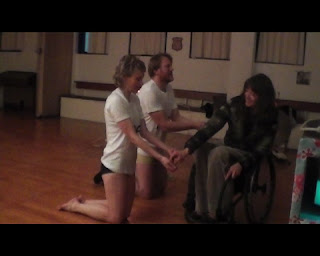 Posted by Winning Productions at 06:19 No comments: